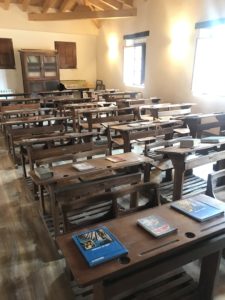 Museos Vivos-Living Museums, the network of exhibition spaces promoted by fifteen local action groups of Castilla y León, is not only in good health, according to the excellent results of visits collected this summer, but also grows. Two new centers, located in the Arlanza region of Burgos, have been added to our tourist-cultural offer: the Museum of the Old Schools of Castrillo-Solarana and the Museum of the Baroque Festival of Lerma.

The Museum of the Old Schools of Solarana, whose owner is the Neighborhood Administrative Board of the town, takes advantage of a space put in value in 2011 with the Leader funds managed by ADECOAR. A careful intervention that allowed its rehabilitation and conditioning and that has made it possible to have a space of interest that recreates the schools of yesterday, with all the original elements of the same.

This new resource is located next to the parish church of San Pedro, a spectacular 12th century Romanesque building, declared an Asset of Cultural Interest with the category of Monument in 2006, and a scenic viewpoint overlooking the Arlanza valley, making it a strategic point of high interest for visitors.

For its part, the Museum of the Baroque Festival has been installed in the former convent of San Juan, a historic building owned by the municipality but managed by the Cultural Association La Hormiga, responsible for the realization of this event that since 2000 is held during the first weekend of August. The colorful costumes and elements that are used for the festival, and that this group has in custody, make up the content that can be enjoyed in this new space. The conditioning of this museum content has also had the support of ADECOAR, in this case through the agreement signed annually with the Society for the Development of the Province of Burgos (Sodebur), under the Provincial Council.

Promoted by the Association for the Development of the Arlanza Region (ADECOAR), the adhesion of these two new centers brings to six the number of spaces in which this successful smart visit system has been implemented in this region of Burgos, bringing the total number of centers in the province of Burgos to 30.

The network of Museos Vivos-Living Museums is made up of a total of 71 exhibition spaces located mainly in the autonomous community of Castilla y León. The offer also includes three others in Galicia, and another in Lobec, in the Czech Republic.

The project has achieved international recognition this summer after being the only Spanish initiative selected to compete for one of the Rural Inspiration Awards - Inspiration Awards/RIA 2022, which for the past four years has been awarded by the European Network for Rural Development and which selected it as a finalist among 111 applications from 24 different countries.